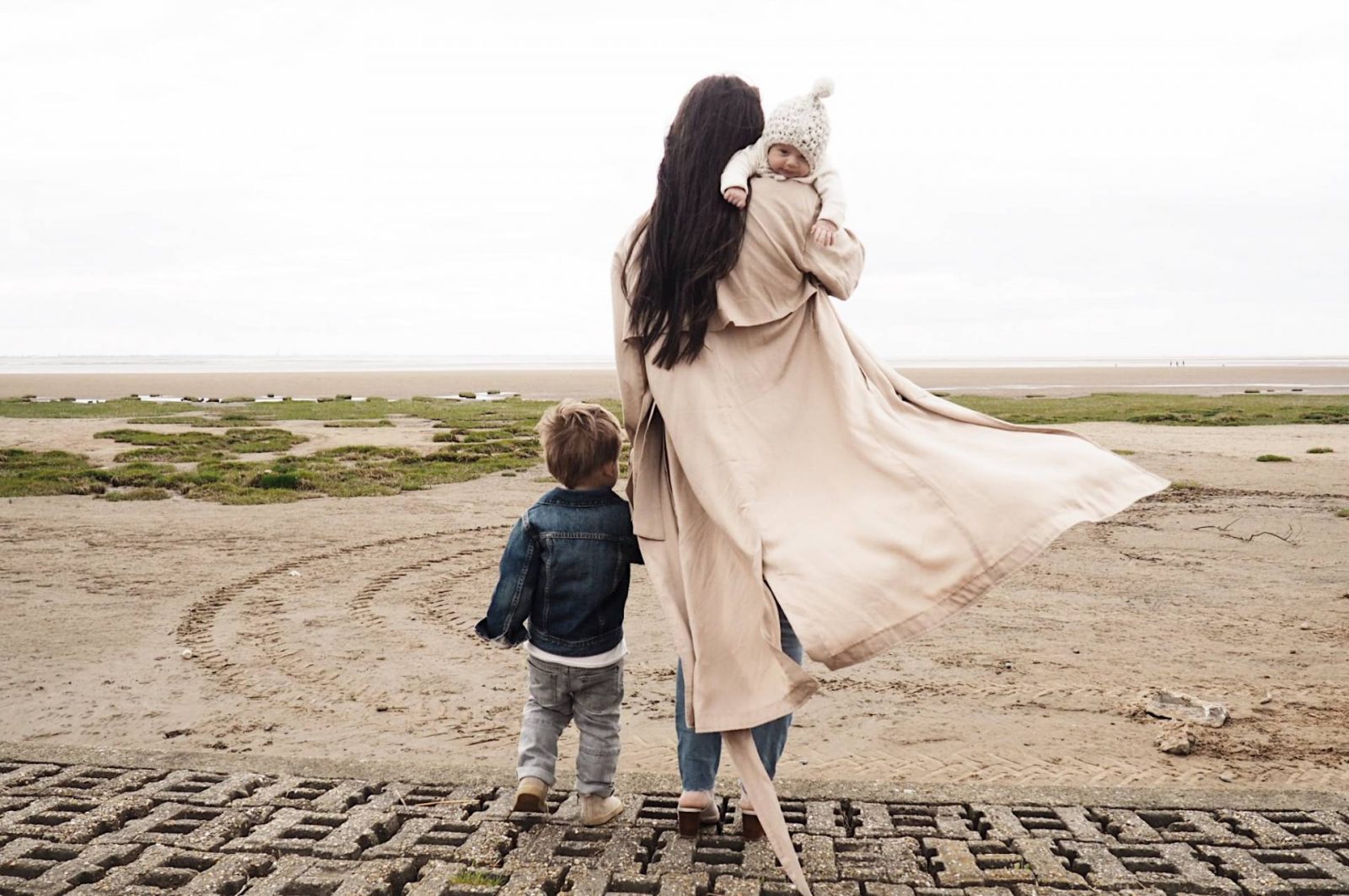 I’m writing this from a super happy place at the moment, Remy is now 12 weeks old and Hugo is going to be 3 in September. I feel like we’ve finally found our groove and general day-to-day tasks don’t seem like such a chore but more a part of everyday life if that makes sense. Let me tell you though, everybody’s groove is completely different so please don’t ever compare yourself to anybody else. For example some people have their babies in routines from day one and some people just go with the flow more, some people get up at the crack of dawn and some people don’t, whichever path you find yourself on remember it’s YOUR path and YOU’RE doing a great job!

For me, I’d say Remy’s first 5-6 weeks were the toughest yet of my parenting journey. Yep, motherhood is hard and there’s no shame admitting it. Being a mother to a two-and-a-half year-old and a newborn is a relentless challenge and certainly puts you to the test but I can’t tell you how just being open and honest about the tough times as well as the blissful times has made me feel so much more positive.

A few weeks ago I decided to share on Instagram stories how I was feeling at the time – due to all the changes a newborn can bring and the difficulty of having a rebellious toddler in tow. How sometimes I would just cry thinking I’m a failure at being a mother to two children. I can’t tell you just how much this did me good! It was like a HUGE weight lifted instantly from my shoulders and even by the end of that day I felt so much happier with that feeling of ‘I’ve totally got this’. So many mums messaged me thanking me for sharing and shared their own trials and tribulations with me and I absolutely loved it. It goes to show that no matter how alone you can feel there is always someone who can relate to you and what you’re going through. I even had mums message me who remembered that time from 20 years ago and gave me reassurance that I’m doing a great job and that it does get easier. 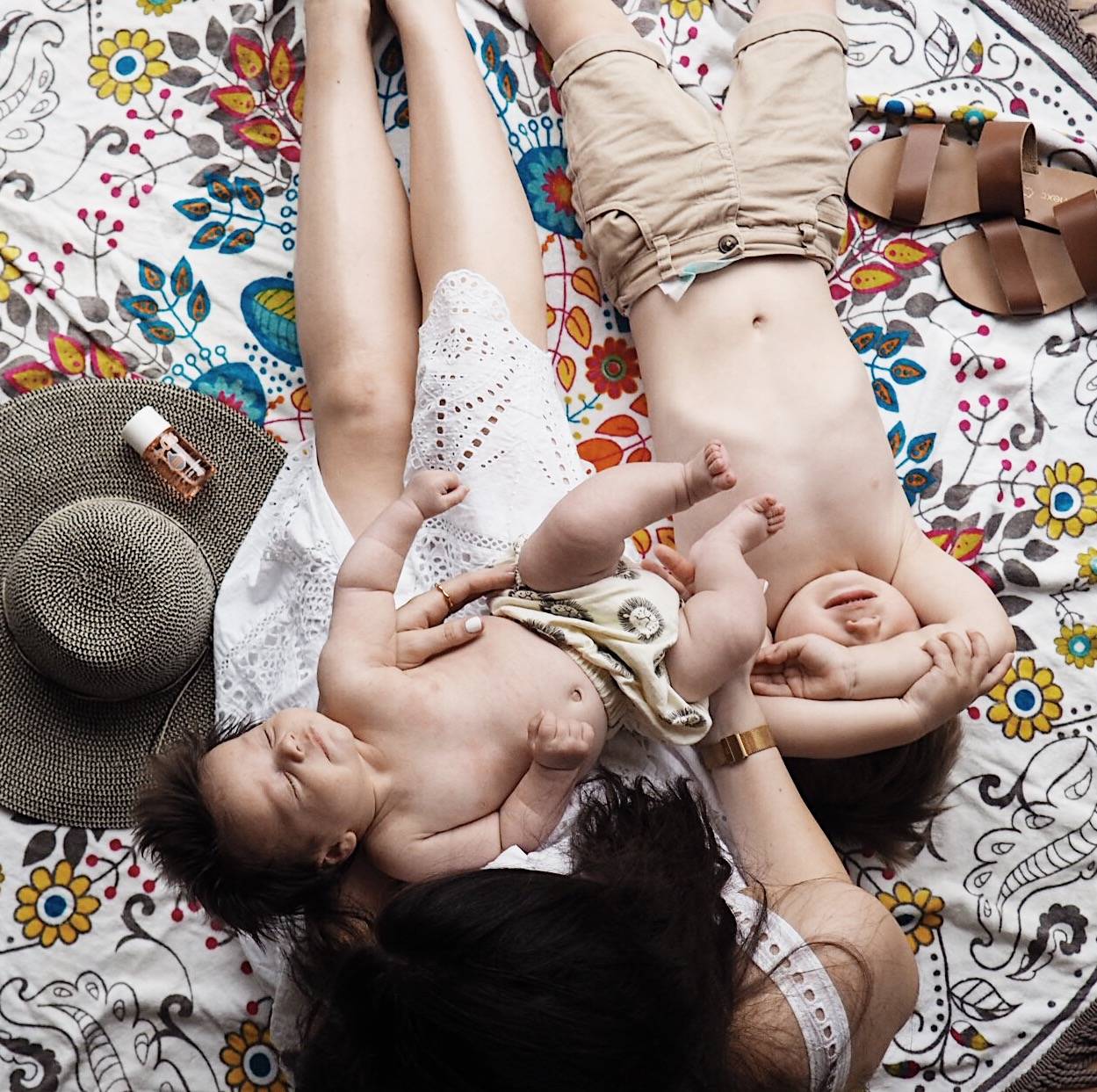 So the reality for me during those first few weeks of having a newborn and a toddler were some nights it felt like I got no sleep – Remy would often only find comfort in sleeping on my chest. I would wrap my bbhugme pillow around me propping up both my arms so I couldn’t roll or move and Remy would lie happily on my chest, without realising I would often doze off and wake up fretting that I had Remy on me! Where’s Remy? But he was always just there still happily sleeping on my chest with my arms cradled around him in the exact same position I had dozed off in. It was the only way any of us got any rest. I know there’s stigma attached to babies co-sleeping and I totally understand why but…. well, Remy is a belly sleeper. We tune ourselves to their need. The health visitor didn’t help; she left me feeling guilty for letting him sleep on his front even though he would just cry and be super unsettled if I left him on his back. I think he suffered from colic and reflux in those first few weeks of his life too which didn’t help.

Yep, I know that sleeping with a child on your chest isn’t ‘best practice’ but I do kind of feel that us mothers never truly fall into deep slumber and I’m always so conscious of where Remy is. Plus, he was safeguarded by the aforementioned pillow around us that snakes around my body and prevents him from slipping down so this gave me some peace of mind. Even now at 12 weeks, if he makes even the slightest strange sound in the night I wake up immediately checking he’s OK. Of course, I’m not openly advocating babies sleeping on your chest every night, it’s just what we ended up doing in our circumstances as that’s the only way he would sleep – I’d say if you can avoid this, then great. But you’ve got to look after yourself too. 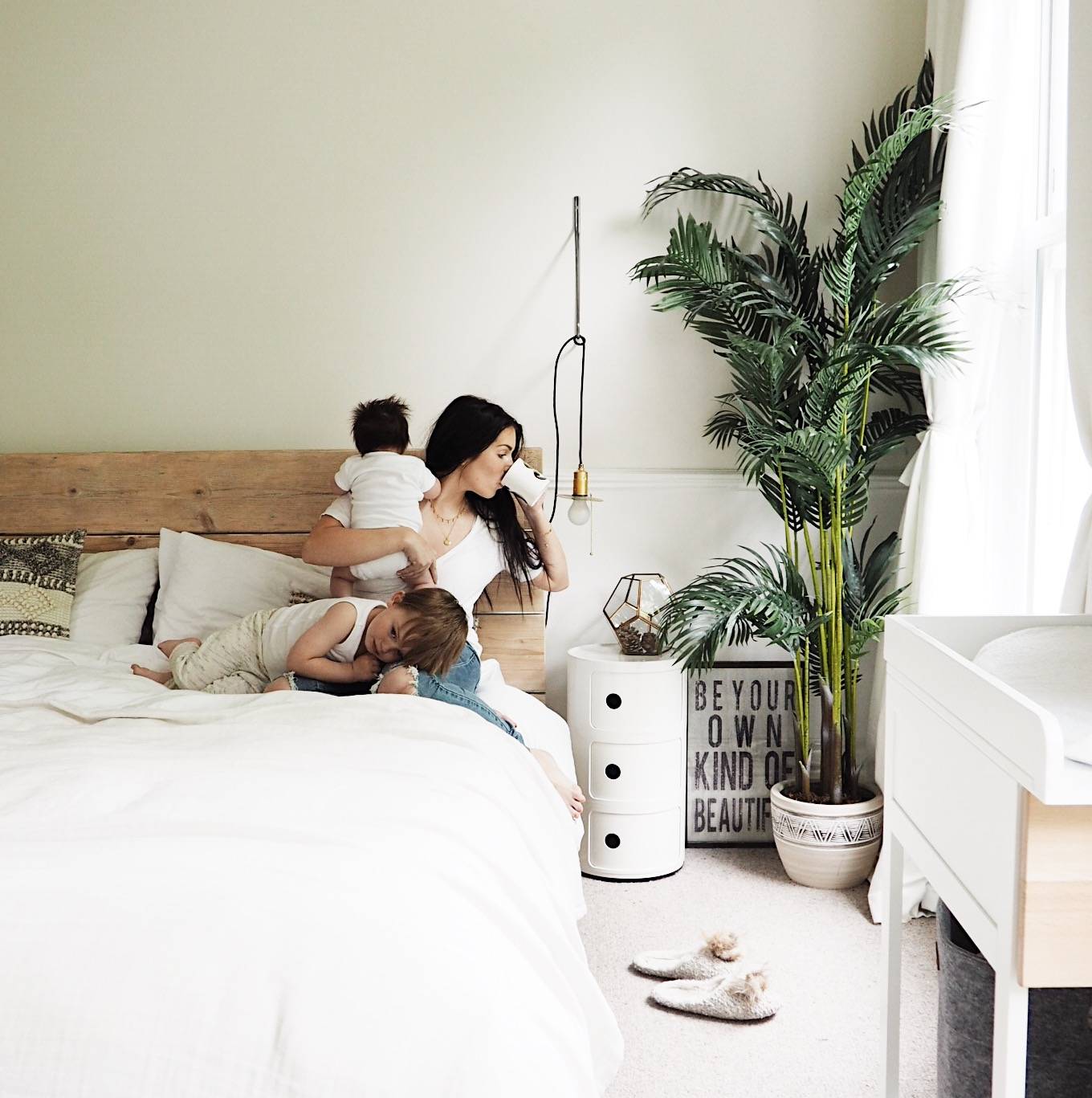 The real testing time came when Hugo would come bounding into our room at 5/5.30am after both Ayman and I had gone through such disturbed sleep and if we didn’t attend to him straight away, he’d crank up the volume and end up waking up Remy. He was also partial to inquisitively poking his little brother and waking him up that way if his shouting hadn’t done the trick! Often he’d leave a trail of destruction around the house, like throwing all his teddies down the stairs and pulling all his neatly ironed and folded clothes out of the drawers. All totally normal behaviour of a child who just wants some attention, I guess. Sadly for us it often came at times where we were like walking zombies. After a couple of mornings of this Ayman would instantly take Hugo downstairs, pour himself a strong coffee, and sit with Hugo in front of CBeebies to buy me and Remy some more time to rest upstairs in silence.

Hugo generally sleeps through to around 7 to 7.15am but when the clocks went forward at the end of March and due to the mornings being so bright, his body clock changed and he went though a prolonged phase of being up and about at 5am. Of course, when combined with the birth of Remy, you can imagine just how tired we all became. After a couple of weeks of this I went on a mission to buy Hugo some black-out curtains – which have helped SOOOOOOO much, why I didn’t do this sooner, I have no idea! Frazzled mum brain.

So now Hugo is back to a reasonable 7am-ish which is great and obviously Remy is so much more settled too :). He generally goes anything from 3 to 6 hours for a feed now and sleeps happily on his tummy in his crib which means I can get some quality sleep in-between too. I decided to go with my gut instinct and let him sleep in the position he’s most happy and settled in and so far so good. 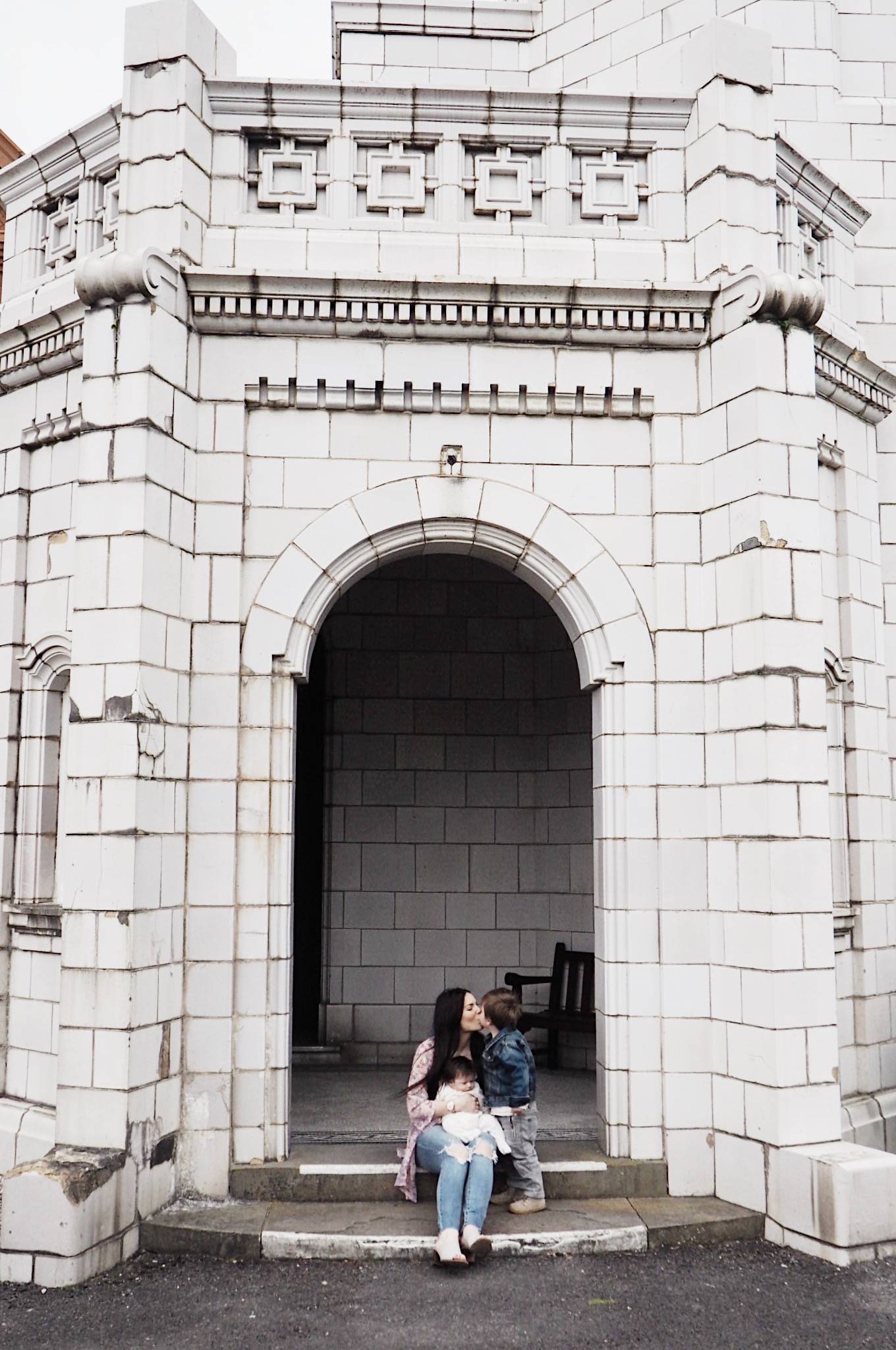 Looking back, there were difficult times when Ayman’s paternity leave finished and he was back in work, meaning I had to look after Hugo and Remy on my own. I know this is a tough stage that many mums seem to relate to. Hugo would never be horrible to Remy during this time, he was quite the opposite; he loved him too much and was totally infatuated to the point that he couldn’t stop hugging him (around his neck like a headlock), prodding him, talking to him and constantly wanting him to be awake. This is obviously infuriating for a sleep deprived mother who has ‘just’ got the baby to sleep. It’s so hard not to shout at your toddler – we all have a breaking point! And it felt like with Hugo at this stage, I was breaking time and time again. Then I would feel frustrated with myself for shouting at Hugo knowing everything he must be going through and the confusion of the changes around him and it was a complete vicious circle.

How to get out of this rut?

Don’t worry about getting yourself all pruned and glamorous… just whack on some clothes, the same for the kids, grab your nappy bag and get out of the house! Go to the park, a walk somewhere, anywhere where your toddler can be distracted. Fresh air is perfect! Your baby will probably sleep in the pram so you and your toddler can spend some quality time together.

FORGET ABOUT THE HOUSEWORK! There will always be housework but at this moment in time your toddler needs you and it’s so important that this comes before jobs. Ayman used to tell me that homes with two infants shouldn’t be super tidy and pristine; that’s not how life works! I guess it was his way of taking the pressure off a bit.

The general mentality of getting out of the house and not fretting about all the other stuff really, REALLY helped me. As soon as I started putting this into action it felt I could enjoy this precious time again with both my boys together. Hugo was happy, Remy was happy and I was happy. The house was a mess with stacks of washing and ironing to do but we were happy, sleep deprived still but happy!

That’s the best advice I can give you right now and honestly since I started doing this I’ve felt 100% better. Three months in, I’m managing to keep the house in check more too which I never thought possible haha. It’s all about one step at a time isn’t it.

I’ve also started doing a few things for myself, ensuring I have some ‘me time’ too. I’ve recently joined a hot yoga studio and do one class a week. I also go out for a jog three times a week thanks to an amazing group of women on Instagram all doing the ‘Couch to 5k’ craze. We encourage each other to go out and just do it and you know what, even when you really don’t feel like going you ALWAYS feel so good after! It feels great to have these times where I can just invest in myself, my own health and well-being and honestly I’ve never felt happier. Yes I still go through tough and challenging times but I have developed the attitude that ‘I’ve totally got this’.

Just remember; we’re only human and after all, tomorrow is a new day and there is always coffee.

Please share your stories with me, or anything that works for you when you hit testing times with your kids. It’s great to recommend to each other and for others to read your comments as we’re all in this together! Parenthood United!

Have a great week and can I give you all some homework? Go out and do something for yourself this week! You’ll feel amazing for it!